Doubling down on fortification data during COVID-19

The Global Fortification Data Exchange (GFDx) can help policymakers and business in responding to COVID-19 by providing the best available data to maximise the existing resources to address micronutrient deficiencies, especially for the most vulnerable communities.
Copy and share the link
Global Alliance for Improved Nutrition (GAIN), Iodine Global Network (IGN) and Food Fortification Initiative (FFI)

Strong immune systems need good nutrition to function and protect us against disease. However, it is likely that short-term containment and suppression strategies to reduce COVID-19 transmission have direct and indirect effects on nutrition, due to the simultaneous and overlapping disruptions to incomes, food supply chains, health systems, preventive health services, and social protection systems. And we know that, in general, lower income countries have fewer financial and other resources to cope with the consequences of these disruptions, compounding the health crisis with an economic and social crisis.

The COVID-19 crisis is creating multiple shocks that will undermine people’s nutrition, particularly women, adolescent girls, children, older people and marginalised groups in the poorest countries of the world. An estimated 140 million people are expected to be pushed into extreme poverty. When food prices increase and become more volatile, particularly with respect to fresh produce and animal sourced foods, there are negative implications for dietary diversity.

With limited fresh foods, we can expect that inexpensive staples and condiments with long shelf lives will make up an even greater percentage of daily diets than normal. However, these products, particularly the refined versions that are most commonly consumed – wheat flour, rice, maize meal, salt – are not naturally rich in essential vitamins and minerals. It’s not yet clear how nutrition status affects COVID-19 risk or disease management since the virus has only been known for only a number of months. However, because malnutrition in all its forms exacerbates incidence and severity of disease, it is likely that the same holds true for COVID-19.

This is where fortification can help.

Fortification of staple foods and condiments is a safe, very low-cost, effective and evidence-based public health strategy to ensure that everyone, including the most vulnerable, has access to essential vitamins and minerals. Therefore, sustaining fortification throughout crises is important, especially when the knock-on effects of a crisis can continue to disrupt the food system for some time. 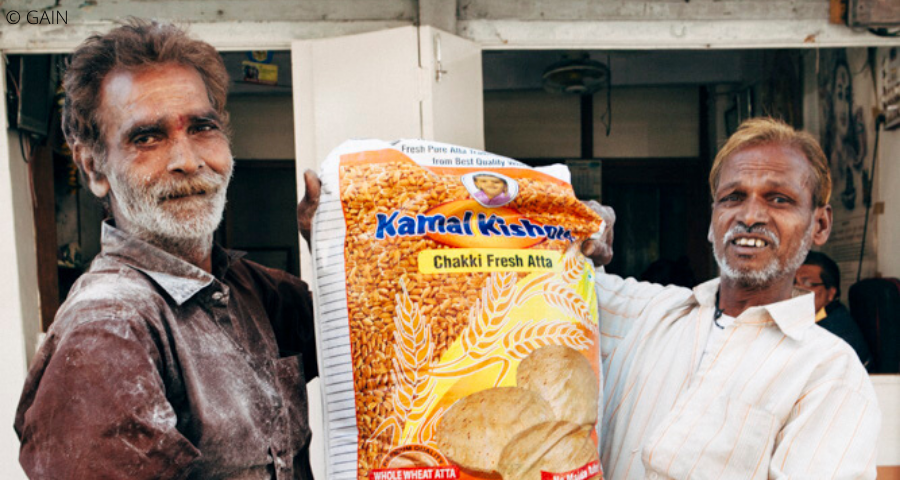 Furthermore, fortification is an adaptable intervention well-suited for the social distancing requirements demanded by the COVID-19 pandemic: large-scale fortification does not require direct person-to-person contact to deliver micronutrients to beneficiaries.

The role of vitamins and minerals for the optimal functioning of immune systems is well established. And data about the status and progress of large-scale fortification of staple foods and condiments is  readily available and easily accessible via the Global Fortification Data Exchange (GFDx).

The GFDx is an online analysis and visualisation tool that aims to provide policy makers and experts from the public and private sector with the data they need to track global progress on food fortification. It can also help decision makers discover ways to improve the quality of national fortification programmes, and highlight areas where businesses can help (see more on the GFDx in the box below.

Given disruptions to foods supply chains caused by COVID-19, especially with nutritious, perishable foods, it is important that existing fortification is maintained and scaled up, or that fortified foods are integrated into social safety nets by well informed decision makers. To do this well, we can use the best available data to maximise the existing resources to address micronutrient deficiencies, especially for the most vulnerable communities.  There are important examples of public distribution systems in countries which include fortified rice, wheat flour or iodized salt as part of essential packages which provide immediate enhancements to dietary quality. 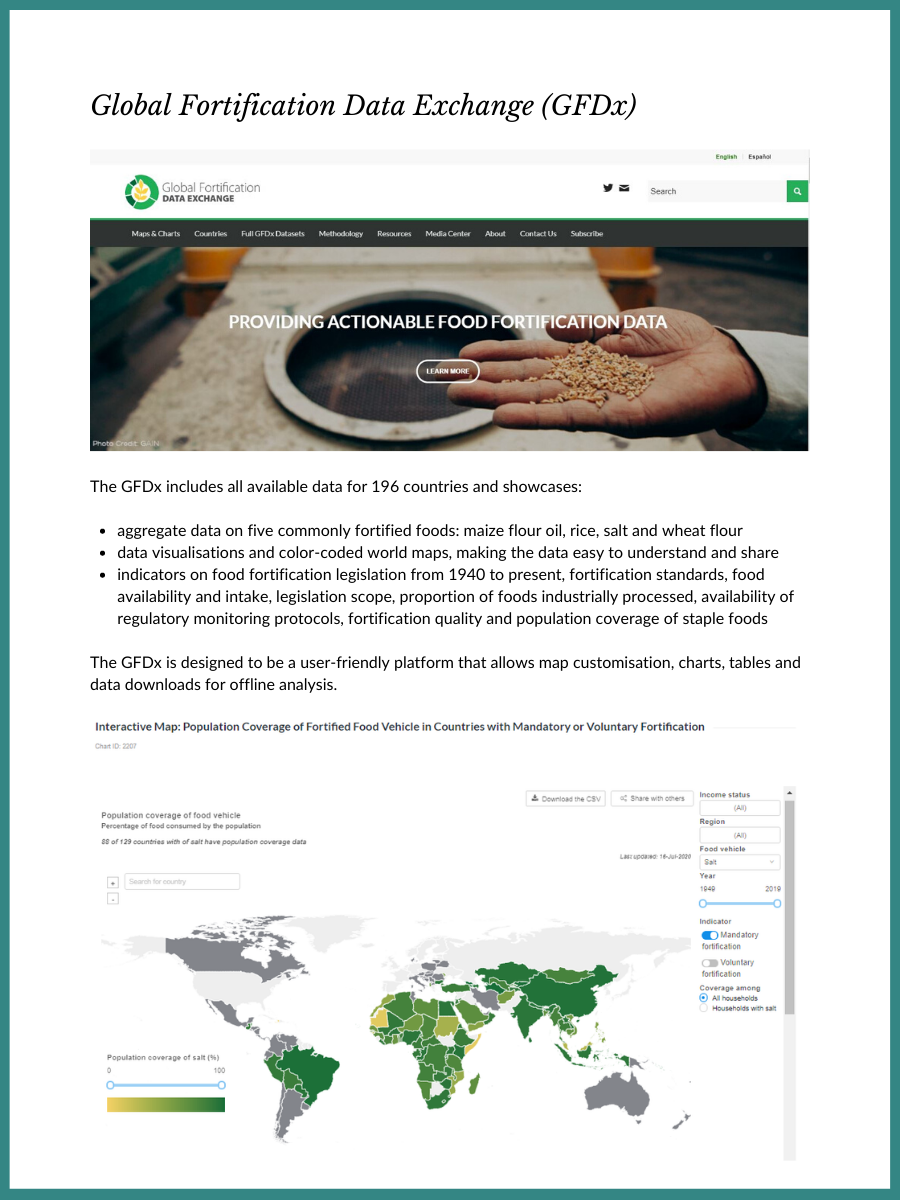 The GFDx is continuously updated as new data and information becomes available.

Learn how to use the GFDx

Vitamin and mineral deficiencies affect people globally – impacting their health and limiting their ability to contribute to the economic well-being of their communities and countries. Nearly 100 years after the first industrial fortification efforts began, over 100 countries have national salt iodization programs, more than 80 countries mandate at least one kind of cereal grain fortification and over 30 mandate the fortification of edible oils, margarine and ghee.

Fortification has played a major role in increasing the availability of vitamins and minerals important for health and development, including iodine, iron, folate and vitamin A, in the diets of people across the globe. This has led to several success stories—including reductions in birth defects, reduction in prevalence of iodine deficiency disorder, and improvements in vitamin A status.

“…Copenhagen Consensus proposed micronutrient fortification, particularly iron fortification of staples and salt iodization, as one of the “best-buys” among the 30 interventions they considered for addressing the 10 great challenges facing global development.”

Large-Scale Food Fortification [LSFF] or “industrial food fortification” – is fortification that is done during the milling or processing stages of food production e.g. iodised salt, vitamin A fortified oil. It is considered one of the most cost-effect population-based, food system interventions with enormous untapped potential to reduce and prevent vitamin and mineral deficiencies worldwide.

During the first Global Summit on Food Fortification in Arusha, Tanzania in 2015, there was a realization among the nutrition and wider development community that many different stakeholders collected and housed data on fortification in different ways, and in different places. In response to this, the need for harmonization and better accessibility to inform policy and identify populations was expressed formally in the 2015 Arusha Statement on Food Fortification.

By 2017, the Global Fortification Data Exchange (GFDx) was launched thanks to a collaboration between the Global Alliance for Improved Nutrition (GAIN), the Iodine Global Network, the Food Fortification Initiative and the Micronutrient Forum, with support from the Bill and Melinda Gates Foundation.

Designed by the fortification community, the GFDx relies on the cooperation of both providers and users of data to help reach our aspiration for an improved data landscape in food fortification.

To get in touch with the GFDX Secretariat, you can send a message via this Contact Us page, or send an email directly to info@fortificationdata.org.

Learn more about the organisations involved in the GFDx